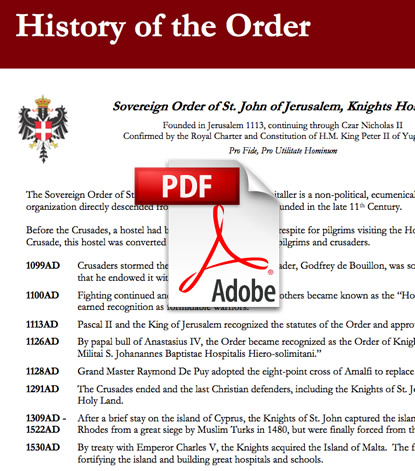 The Sovereign Order of St. John, the oldest Sovereign  order of chivalry in existence today, has its roots in a hospice founded in Jerusalem in the eleventh century by merchants from Amalfi, to assist Christian travelers in the Holy Land. Some knights of the First Crusade, upon entering Jerusalem in July 1099, joined in these good works already underway. The resultant knight/hospitaller organization was recognized as a self-governing Sovereign order by Pascal II in a Papal Bull dated February 15, 1113. Today, all major Sovereign Orders of St. John, including our Sovereign Order of St. John of Jerusalem, Knights Hospitaller, stem from this recognition, retaining the symbol of the white Cross of Amalfi under which the serving brothers worked in Jerusalem. The Sovereign Order quickly took the form of a military Sovereign order of chivalry, continuing the hospitaller traditions, but also becoming one of the principal defenders of the Latin (Christian) States in the Holy Land.

The following allocution containing a brief history of our Sovereign Order was given on March 11, 2006 at Grace Cathedral in San Francisco, California by Grand Commander H.E. Conventual Bailiff Lawrence Owen Brown, GCSJ, MMSJ.

Our rich heritage of defending the Christian religion and serving humanity goes back over 900 years to the time of the First Crusade.

When the Crusaders stormed the gates of Jerusalem in 1099, they found a hospice, later dedicated to St. John the Baptist, which had been established for the purpose of helping sick and weary people who had made pilgrimages to the Holy Land, but it treated Christian and Muslim alike.

The hospice received support from the merchants of Amalfi, a port near Naples, to assist traders as well as pilgrims. Their emblem, in the form of the Eight Pointed Cross of Amalfi, is the cross we wear with such pride today. In 1113, the brothers of the Hospice were recognized as an Sovereign Order of Knighthood, and in 1126, they also took on a military role. After two hundred years of crusading, however, European support was waning and, in 1291, the Sovereign order lost its last foothold in the East, that of Acre.

After a brief time on Cyprus, they went to Rhodes, which they held for some 213 years. They became renowned for their hospital and advanced medical treatment. However, the Islamic empire was expanding, and they were again attacked in 1521, by overwhelming forces under the command of Suleiman the Magnificent. Although the knights lost, they were permitted to leave Rhodes, taking with them their sacred relics, which Suleiman allowed because they had fought so bravely and honourably against overwhelming odds.

For a short time, the knights were without a home. But in March of 1530, the Holy Roman Emperor, Charles V, because of his admiration for the valour of the Knights in their defence of Rhodes, signed the Act of Donation of Malta bestowing the Island of Malta to the Sovereign Order along with several other nearby islands.

The only feudal service demanded in return was the annual payment, on All Saints Day, of a single falcon, which was to be given to Charles Viceroy in Sicily. This annual token payment was the origin of the legend of the Maltese Falcon.

As they had done on Rhodes, the Knights built a great hospital. They strongly fortified the island and greatly expanded their navy. Their wealth expanded rapidly, and the Sovereign Order became the owner of vast properties throughout the Christian World. Their skills and knowledge as bankers for the world became renowned.

Again on Malta, however, the Sovereign Order faced a determined attack by the forces of Islam, this time with a much superior force of 40,000 men. The Knights, about 650 strong, fought bravely, and, although they sustained great losses, they eventually forced the enemy to withdraw. This battle went down in history as The Great Siege of Malta, and it halted further movement of Islam into the Western World.

The Knights remained on Malta until Napoleon seized the Islands, and the wealth of the Sovereign Order, on his way to Egypt in 1798.

Shortly before this attack, however, Paul I, Emperor of all the Russias, had taken the Sovereign Order under his protection, as the Pope was then in exile. Thus, when the Sovereign Order was forced to leave the island, the main body of knights went to St. Petersburg, Paul expanded the former Priory of Poland to accommodate the added Roman Catholic knights. He also created an ecumenical priory for other Christian knights, the Russian members, and members of the Nobility.

In 1799, Paul was elected the 70th Grand Master of the Sovereign Order, and he soon created an additional 118 Hereditary Commanders. After Paul was assassinated, the new Emperor, Alexander I, assumed protection of the Russian Order. 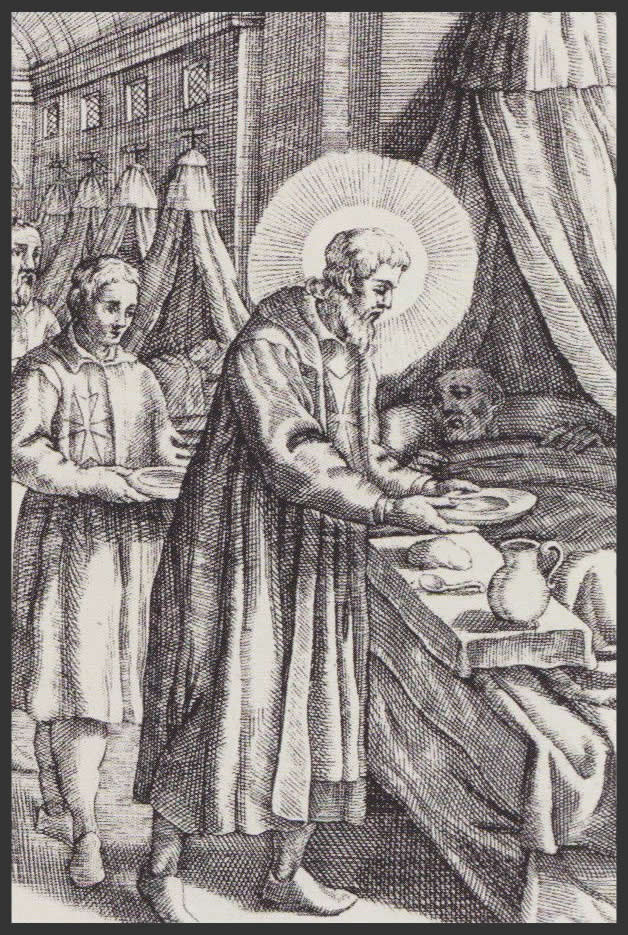 Since the beginning of the Reformation, the Heads of the Royal Houses of Prussia, England, the Netherlands and Sweden have, at various times, maintained or initiated separate Protestant branches of the Sovereign Order, all of which have a great deal of merit and are worthy of our respect.

Our Sovereign Order has a continuing tradition with those Hospitallers who founded the first hospice in Jerusalem because of the actions of Tsar Paul, and it continues to practice the fundamental tenet of serving Christs sick and poor.

After the Bolshevik Revolution in 1917, many of the Russian Hereditary Knights of the Sovereign Order went into exile in Europe and America.

King Alexander, King of Yugoslavia, was a member of the most closely related Orthodox Royal Family to that of the Tsars, the House of Karageorgevitch. At the time of the Russian Revolution, the Sacred Relics of the Sovereign Order were sent to the Yugoslav Royal Family for safekeeping. The Right Hand of St. John the Baptist remains safely stored to this day within the boundaries of Serbia.

In 1962, King Peter II, King of Yugoslavia, in exile and residing in London, was confirmed as High Protector. In 1965 he was elected as the Orders 73rd Grand Master. His Majesty, by the way, was descended both from Czar Paul and Queen Victoria and was a cousin of Her Majesty, Queen Elizabeth II.

King Peter II, in 1964, gave us our present Charter and Constitution. These documents contain the guidelines that we follow in our continuing work of assisting the less fortunate, in accordance with the traditions of the Sovereign Order throughout the ages.

Adhering to the United Nations Universal Declaration of Human Rights, we have ensured that Dames now play an equal role in our Order to that of the Knights. By decree of the Sovereign Council Meeting held in England in 1998, Dames may now hold any office within the Sovereign Order.

Our Sovereign Order is described in our Constitution as: An Ecumenical and International Community of Christian Knights and Dames.

You have reached the website for the Vancouver Commandery of the Sovereign Order of St. John of Jerusalem, Knights Hospitaller www.sosjvancouver.org.

This site has now been integrated into the International Website of the Sovereign Order.  Please visit www.sosjinternational.org/commanderies/vancouver-commandery/ for the most up-to-date information.

Grant Information will be found under Almoner